Filth Finder is an application that loads NYC restaurants near you and allows you to view health inspection violations at each restaurant. One problem that had to be solved when developing Filth Finder was how to calculate the distance between the user and all of the amazing restaurants NYC has to offer. The NYC Open Data API provided the addresses for each restaurant, but Filth Finder needed the geolocation of those restaurants. Fortunately, NYC has a nifty GeoClient API that allowed for geocoding the restaurant locations.

This post will unpack how Filth Finder’s API works with a focus on geocoding. For future reference, the term “establishment” refers to a restaurant in this post.

You can view Filth Finder’s code, including the backend, here.

What does the Filth Finder Rails API do?

What libraries were used for geocoding?

What is a rake task?

Rake tasks allow you to automate processes. In this case, we’re automating the process of geocoding establishments and saving them to the database. Once they are saved to the database, we can use them on the frontend to determine which restaurants are closest to the user. The rake task was generated with rails g task establishments. This generates a file called establishments.rake. Below, you can see the “bare bones” of a rake task:

Geocoding locations and saving to the DB

Camis is a uniqe id number assigned to each establishment in the NYC Open Data API.

A new client is created using the NYC GeoClient API and set it equal to the client variable. Then, establishment data is fetched from the NYC Open Data API and parsed into JSON. The JSON is stored in a variable called establishments. Next, the code iterates through establishments and checks to make sure that only establishments with existing Camis ids will be geocoded.

Next, the code builds establishment objects with the following attributes: camis, dba, and address. Notice that the NYC Geoclient calls the adress method (client.address()) and sets the house_number, street,borough, and zipcode. This line of code is where PostGIS geocoding happens:

It takes the latitude and longitude we created using the NYC GeoClient API to create a single point. Finally, the establishment object is saved to the database.

In Postico, you can see how the location column stores the geocoded location of the establishment. 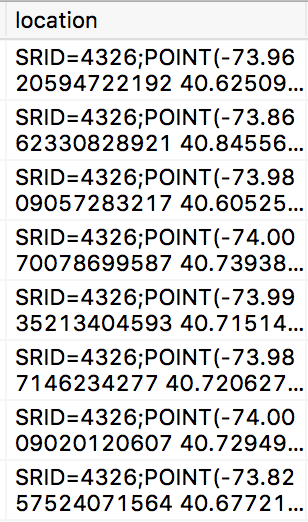 How does the API provide the 50 closest locations?

Now that we have all the establisment geolocations, we can query the database and return the restaurants closest to the user. With that said, the API has a route where users can find the locations near them.

The EstablishmentsController uses ActiveRecord to retrieve the top 50 establishments closest to the user. The <-> function determines the distance between the user and the given establishment. Note, the user’s location is passed in through params and converted to the datatype of geography. SRID stands for “spatial reference id” and tells Postgis which spatial reference system to use. In this case, the code stores the data using the WGS84 projected coordinate system (SRID 4326) that allows you to calculate things such as the distance between two points. I found this Stack Overflow post helpful in explaining SRID.

Here is the ActiveRecord query translated into SQL.

This route and endpoint made is possible to compare the user’s geolocation to each establishment geolocation and render the closests 50 establishments on the client. Thank you NYC GeoClient for making it all possible!